The original VC was destroyed by fire in 1951, a replacement was given 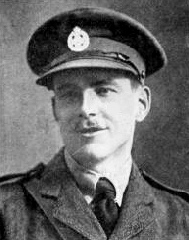