Place Of Death   At his home, Liverpool, Lancashire, England

He just started out in the cotton trade like his father before the war, returning to it at various times after the war 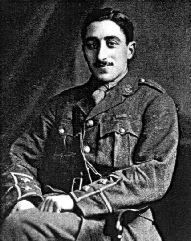