In World War 2 he was captured by the Japanese on Java, and held as a prisoner of war until 1945. After release he worked on the Japanese War Crime Trials 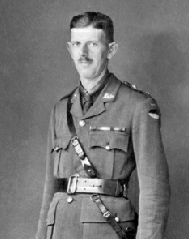