On his retirement he was the most wounded Officer in the British Army, being wounded twice in the Boer War, once in Somaliland and eight times on the Western Front 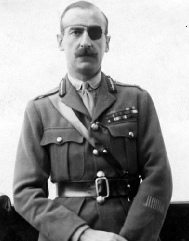