Stolen c. 1956 although his family suspected that due to his absent-mindedness he probably left it somewhere and it had been ‘picked up’ 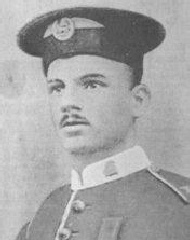