He was buried where he fell, but the cemetery was lost during later fighting 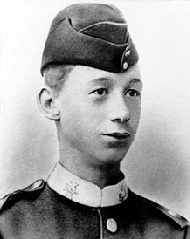