He was nearly killed before his VC action, when the enemy showed a white flag of surrender, then firing on John Dimmer when negotiating surrender

To his family he was known as Jack 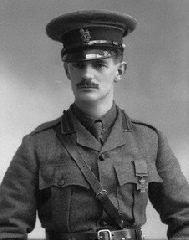