VC Presented   Registered post to his family on 11 January 1915

Awarded the first posthumous Victoria Cross of The Great War 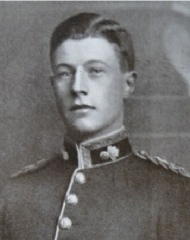 Many thanks to David Knight of Stonyhurst College, Lancashire, for the photos of the memorial at the college