At the first investiture of the cross, 62 VC’s were awarded, Claud Bourchier was the last to receive his 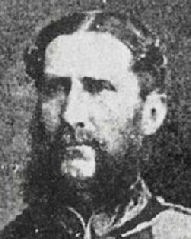