Buried/Location Ashes   At sea, between Malta and the Island of Filfla

He was Govenor of Malta at the time of his death 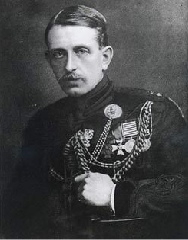