Headstone   Vault   Plot/Grave no.   Vault inside church with access from outside, next to Church wall

After his military life, he was a conservative MP for Berkshire

He led the attack on the position known as sandbag battery with 39 Palmer showing great bravery and leadership, he regained the position. 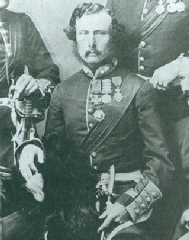