His VC action was in Lwekaw, modern spelling Loikaw, which is the capital of Kayah State, in Myanmar, (Burma) 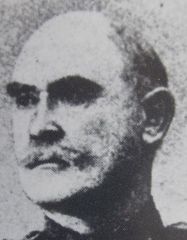