During the Battle of Alma he captured a Russian gun, then took command of the regiment, when all other senior officers were either killed or wounded. 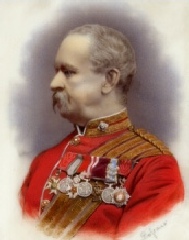