VC Presented   2 March 1883 by the Commander in Chief of Gibraltar, Lord Napier at Cairo, Egypt 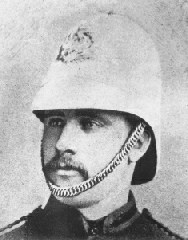