He was first to volunteer to dislodge a party of Russians from a position known as sandbag battery, which they secured. Also finding time to save the colours and Major Sir Charles Russell. 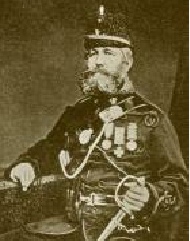