Rank End Of Career   Captain of the After Guard

He had for many years an imposter, who claimed he was the real James Gorman, causing great confusion.

At the Battle of Inkerman, when the Lancaster Battery they were serving, was attacked by a large enemy force, they mounted the parapet. Using their guns and the guns of the wounded, they fended off the attack. 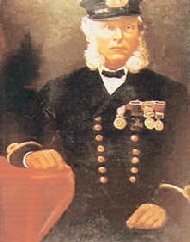