Won the VC with the 49th Regiment that became the Berkshire Regiment, that is now the Rifles. But gazetted when he transferred to the Coldstream Guards.

Whilst being in an isolated position outside Sebastopol, he repulsed a heavy enemy attack, by leading by example and strong leadership. 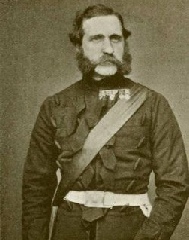