During a hunting expedition he was trying to uncork a brandy flask his shot gun slipped between his legs and both barrels went off, hitting the right side of his chest (33rd Regiments official version of death)

Having charged with the Light Brigade he returned into the fight to save the life of a sergeant who was surrounded by Russian Dragoons. Moments later he repeated this feat saving the life of a private. 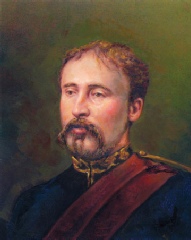