In 2014 a registered charity was formed “Cams Cause” with the aim of upholding Cameron’s legacy in raising awareness and much needed funds for soldiers’ welfare, and especially the Commando Welfare Trust. www.camscause.org

The Corporal Cameron Baird VC scholarship was set up in 2016 and is awarded to a year 12 student who is attending a government school in the Northern Region of Tasmania, of good character and intending to study at the Australian Defence Force Academy the following year. 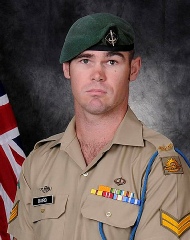