Australia's most decorated post-war soldier, he received medals for every war or campaign in which Australia had participated since the Second World War 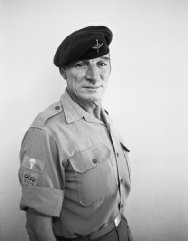