His name is shown in records as Bhanubakta Gurung, his preferred spelling 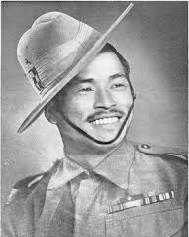