Place Of Death   At his home, Kettleby, near Toronto, Ontario, Canada 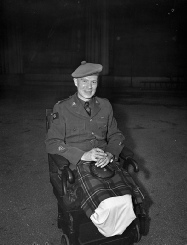