He died following his VC action. Although his plane was severely damaged, he managed to reach friendly territory in order that his crew could bale out, plane then crashed and he was found dead at the controls 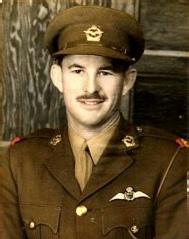