Prime Minister John Major arranged for his VC pension to be increased to ú1,300 from ú168 after meeting him at the VE Day Celebrations in 1995 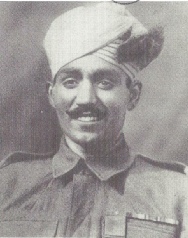