Place Of Death   On a hill near Monte San Bartolo, Italy

The name on the headstone shows name as Thamman Gurung 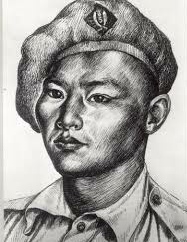