Place Of Death   At his home in Vancouver

Buried/Location Ashes    Ashes committed to the sea from HMCS Ottawa on 14 August 2005, Canada 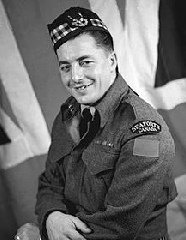