He wanted to be a Surgeon, but the war came along and interrupted his studies, due to injuries to his hand he couldn't fulfil his ambition 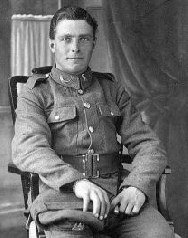