A private in the Kings Own he carried out repair work to the breastwork of the sailors battery, on another occasion refused evacuation until after a Russian attack had been repulsed. 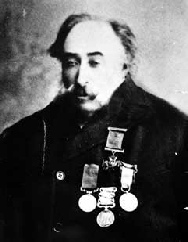