Rank End Of Career   Chief Officer of the Coast Guards

With 110 Commerell, landed a small boat and proceeded to set fire to over 400 tons of corn and forage. Narrowly escaping capture by mounted Cossacks who were alerted by the burning stores 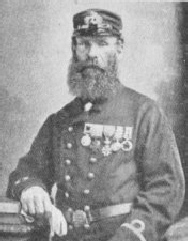