He won his Victoria Cross at the battle of Asiago, on the Italian front against Austrian forces. 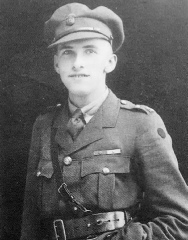