The war resulted from the fact the Russians were trying to expand her borders in the Balkans and the old Turkish empire. 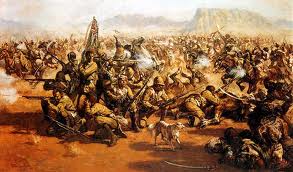